The next thing we need to understand before playing is how to read rhythm.

To begin, notes are typically written on a five line staff which looks like this:

We will discuss the lines and spaces in another lesson.

The length of a note is measured by counting. There are a lot of ways to count. The shape of the note and the time signature used together tells us how to count the music.

For now we will concentrate on three basic notes:

Half notes (or minim):

and lastly, the quarter note (or crotchet):

Each note has an oval shape, called the note head. Half notes and quarter notes also have stems. The note head is filled in on the quarter note. The note heads will rest on lines or spaces, telling us which notes to play. More about this later.

How are these notes related to each other? Well, if you understand fractions even a little, then it becomes simple.

Since notes are measured by counting, working backwards, if a quarter note is given one count, then a half note will have two, and a whole note four.

Now look at four half notes – they are twice as fast because each only gets two counts:

And quarter notes are twice as fast as half notes because they are getting one count each:

There is a reason we switched to counting to four in the last example. To keep track of our counts, notes are grouped together into bars (or measures). The first type of bar we will see will use the time signature of 4/4 (four-four), written :

This number is like a fraction. The top four tells us each bar will have four counts and the bottom four tells us each count is a quarter note (if the bottom number was a two, then each count would be a half note). 4/4 is the most common time signature you will see and it is the only time signature we will be using for a while. Other common top numbers are 2 (as in marches) or 3 (used in waltzes). The bottom number is usually four, but as noted above, other numbers can be used.

Below is an example of two bars written in 4/4 time. The first bar contains 4 quarter-notes, each lasting for one count. The second bar contains a whole note which lasts for 4 counts, and so, occupies the entire bar.

The groups of 4 counts are separated by vertical lines known as bar-lines. A double bar-line signifies the end of a piece.

Silence is part of music too, so for every note or sound, there is a rest with the same number of counts.

These are counted exactly the same as notes. Notice the difference between the whole and half rest. The whole rest points down while the half rest points up. Think of a half rest as looking kind of like a hat. Half and hat both start with the letter “H.” This will help you keep track of the difference.

Next lesson:  Putting it all Together 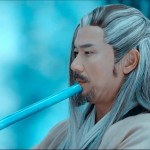